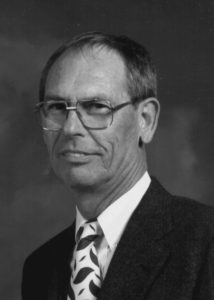 Thomas S. Haydon Jr., “Tommy”, graduated from the University of Kentucky with a civil engineering degree in 1970 and already with six kids in tow. After working for a couple of years for consultants and contractors, he struck out on his own in 1972 with the incorporation of Haydon Bridge Company. 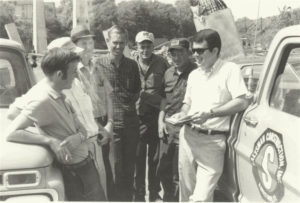 Many projects took Tommy away from home during the week only to come home on weekends.  At one point, as the story goes, Tommy was walking up the front steps to the house one late Friday afternoon and one of the children screamed “Mom, that man is here again!” One of the early “large” projects was in the late 70’s in Floyd County, Kentucky, working for the Prime Contractor, Raymond Equipment, rebuilding portions of Route 80.

The 2nd generation, Thomas and Philip came into the business in 1984 and remain to this day.  Both worked in the field for a few years and then Thomas returned to the office and Philip remained in the field.  Tommy Haydon remained President and active in the business until his death on March 7, 2007. Thomas S. Haydon III currently serves as President and Philip M. Haydon serves as Vice-President.  Philip remains a field presence, while Thomas manages the day to day business and contract administration. 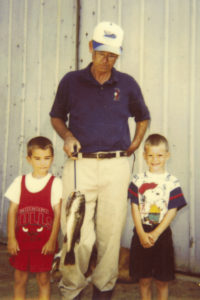 Over the last 20 years, Haydon Bridge has consistently and conservatively grown to the company it is today. Haydon Bridge has grown into the premier bridge contractor in the state of Kentucky. It maintains a full and complete fleet of “owned” bridge building equipment up to and including 300 Ton crawler cranes.

On May 1, 2020, the business was sold to Philip M. “Marshall” Haydon and Kevin B. Wolfe. These 2 leaders will take Haydon Bridge well into the future.  Thomas and Philip remain employed by the company.

New owners, Philip M. Haydon (“Marshall”) and their Vice-President of Construction, Kevin B. Wolfe decided to slowly transition into their new roles, because the ownership transfer took place during the height of the pandemic.  So they decided a slow progression from employee to owners was the best way to handle the transition as the previous owners steadily took a step back. Thomas and Philip are still employed with the company as advisors and trainers slowly handing over the day-to-day responsibilities to the new owners. Philip is still playing an active role in the field operations and Thomas is on-hand for counsel and advice on administrative decisions. The goal of the progressive transition was to ensure the least amount of disruption in operations and project delivery.

THE PRESENT – The Owners

Kevin B. Wolfe, President
Kevin started his career at Morehead State University, who graduated in 2001 with a Master’s Degree in Construction Management, which provided him a unique blend of construction knowledge and business know-how. In 1999, Kevin was hired by Haydon Bridge Company for a Summer Cooperative program. He continued on as an intern until his graduation in 2001, where he was hired for the full-time position of Foreman, working hands-on in the field on various construction projects throughout Kentucky, Ohio, Tennessee, Virginia, West Virginia and Indiana. Nearly two years later, he was promoted to Superintendent. Four years later, he accepted the promotion of Project Manager, where his new administrative duties and responsibilities were handled in the office, rather than in the field.

Within a few years, Kevin had assumed the role of running operations as General Superintendent, where he oversaw all facets of the business, from financial analysis, sales strategies, project delegation, schedules and budget planning, customer service, employee management, and quality control.  In late 2018, Kevin took on the role of Vice-President of Construction to prepare for the eventual transition as co-owner and President.

“Working over the years in the field and in the office, I have learned a great deal from Thomas and Philip, as mentors and partners. They taught me that you need to be honest, do your work with integrity and offer quality services.  While the company has changed hands, those core values have not. Any change we implement carries on our long-held tradition of treating people how you want to be treated.”  – Kevin Wolfe

Philip  “Marshall” Haydon, Vice-President
As a young man, Marshall often accompanied his father, Philip  to work, watching him in the field, and then eventually coming on as a Summer Intern starting in 2004, and working as a laborer/carpenter during the Summers until his graduation from Western Kentucky University in 2013, with a Master’s Degree in Construction Management.

His father taught him a great deal, as a mentor and teacher, thus Marshall followed his father’s footsteps and was hired full-time as a Project Manager in 2013, and then promoted in 2020, as Vice-President, when he took over ownership of his father and grandfather’s company. His uncle Thomas had been in charge of the office administration side of the business, while his father Philip was General Superintendent, much preferring to get his hands dirty in the field. Marshall, like his father, enjoys working and seeing their construction projects take shape from the planning stages through the cleanup and completion.

“My grandfather, Tommy expected his crews to construct the work per the plans and specifications. If there were issues along the way, Tommy backed up his employees 100% of the way if the rules were followed. But if anyone on his team tried to cut corners, he’d make sure his employees were reminded of their core values, to prevent any mistakes in the future. He was fair and honest with his clients but also his employees, as building a great team is an integral part of the Haydon way.” – Marshall Haydon

THE PRESENT – Our Values

Our company has a reputation, from day one to over 50 years later of being a highway and bridge construction company that produces quality work with high standards, honesty, integrity and efficiency without cutting corners.  We have a good working relationship with the Federal Highway Administration, and Department of Transportations for the six states we serve, as well as local, county and state representatives who oversee and manage road, bridge and highway construction. Even though, the ownership of the company has changed hands over the years, our reputation and values have never changed, nor will they in the future.